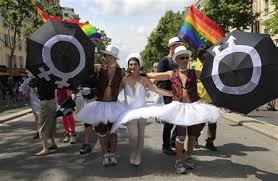 I was going to write a birthday tribute to Fanny Hensel, 210 years old today, but instead I’m re-posting words from March this year. I was celebrating a joyous work composed in a 1916 Paris under siege. The city and its people, all its people, are in my thoughts today.

It’s a bit cheeky to start with an image of La Marche des Fiertes on 29 June 2013, since I’m considering a musical Marche Gaie, composed some 97 years earlier, but both gay marches are Parisian, and I wanted a joyful image (thank you Reuters) with which to start.

A few weeks ago, I spent a highly emotional half-evening at the Royal Festival Hall: emotional because it was my first venture away from Oxford for almost two months (and this is the moment to thank all those who work at the Oxford Heart Centre, but particularly Mr Sayeed…